Results of the 1st year
of National strategy
«Industry 4.0 in Ukraine»
Subscribe

The National strategy Industry 4.0 appeared in Ukraine in Dec 2018. The development was done in the Association of Industrial Automation of Ukraine (APPAU), it is the founder of National movement Industry 4.0. Being non-profit NGO, APPAU had to validate the portfolio of the strategy with its members and it has been done in Jan 2019. The General meeting decided to support 5 projects from proposed 16. The year 2019 has showed that this decision was right, as we had no support from local government and just waiting for that would mean to lost a year.

So far, what are results of the 1st year in implementation of those projects? This overview is oriented to different stakeholders of industrial hi-tech development of Ukraine inside and outside of the country.

The current portfolio is almost unchanged from the original in Dec 2018. The only change, it is a new project, called Industry4Ukraine, it is the coalition platform created to ensure the steady dialogue between manufacturing associations, Government and science organization. During 2019 APPAU remained focus on 5 main projects (green triangles on Fig. 1). 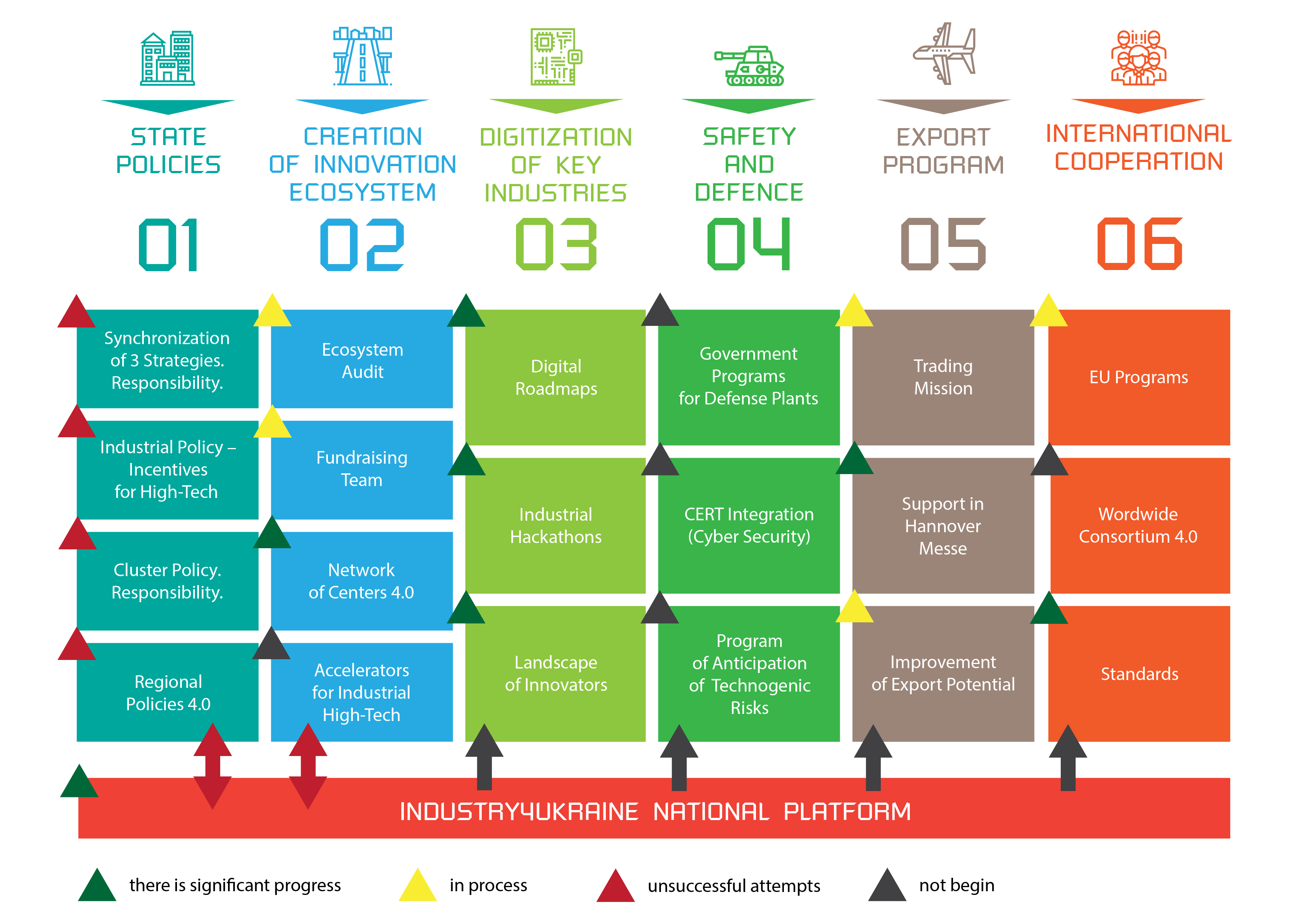 Hereafter these projects in the rate of success. Renewed landscape of local innovators 4.0 (done on Ukrainian, the translation on English is planned on March 2020). In the 1st half of 2019 APPAU hold 3 main activities: 1) the market research, 2) reporting, 3) conference of innovators. It was the most successful project among others as it covers at once 3 strategic priorities: 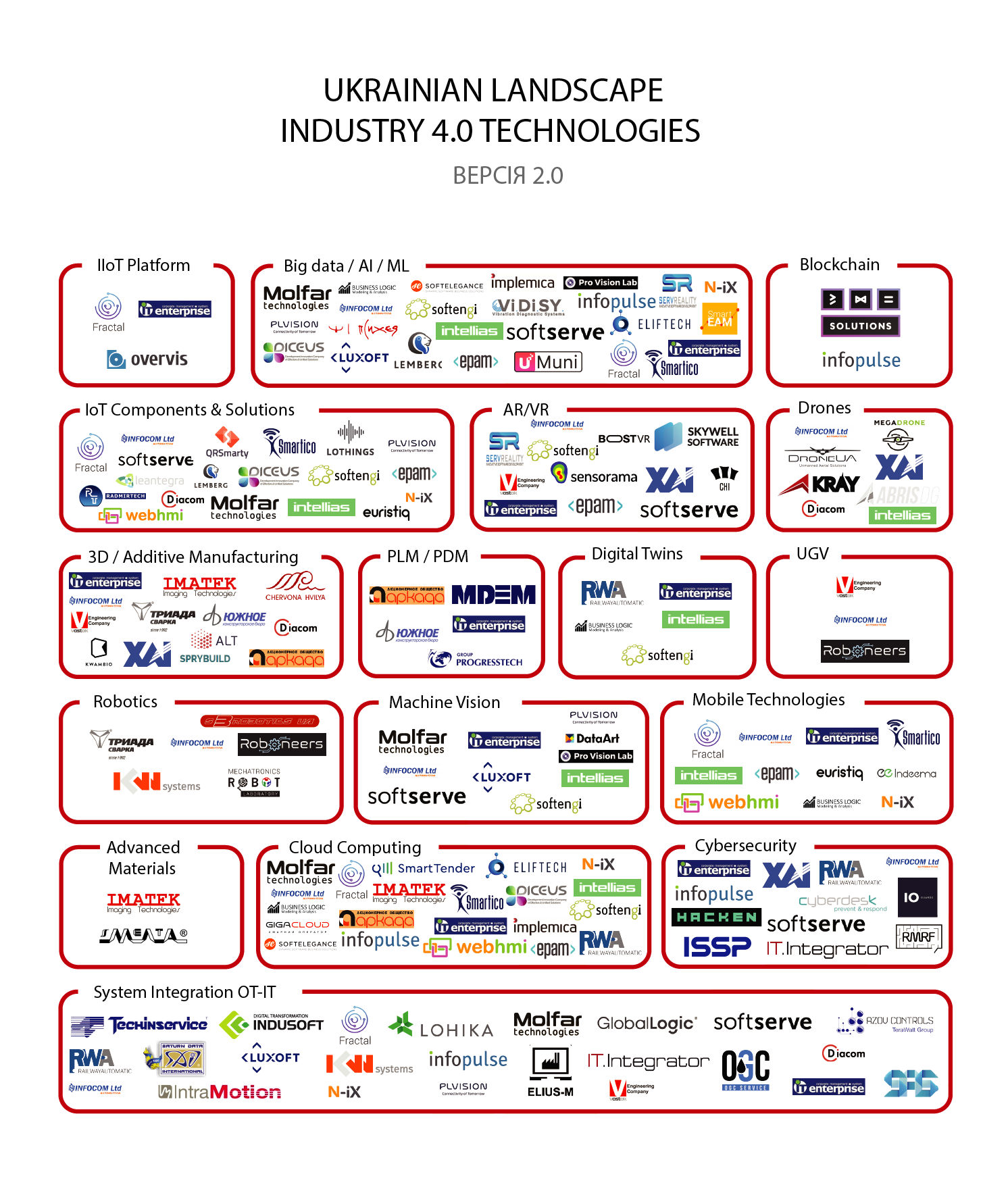 Fig. 2. Landscape of innovators 4.0 in Ukraine To the end of Dec 2019 the project team accomplished the next scope of works:

The team also target the significant improvement in methodology of collaboration of Universities with system integrators and end users. Roadmaps of digital transformation per industry

Strategically, this project is the most important, but also it is the most difficult. For today 1 mini-project has been completed (roadmap concept for Ukrzaliznytsia (Ukrainian Railways)), large one has been launched (AgriFood), a few small ones are in progress (Utility and Maritime), and there have been many interesting exchanges in Metallurgy. The areas of these industry developments include defining key priorities at a particular industry, building relevant digital transformation concepts, and educating customers in Industry 4.0 in this industry. The most significant achievements in these works are the following: 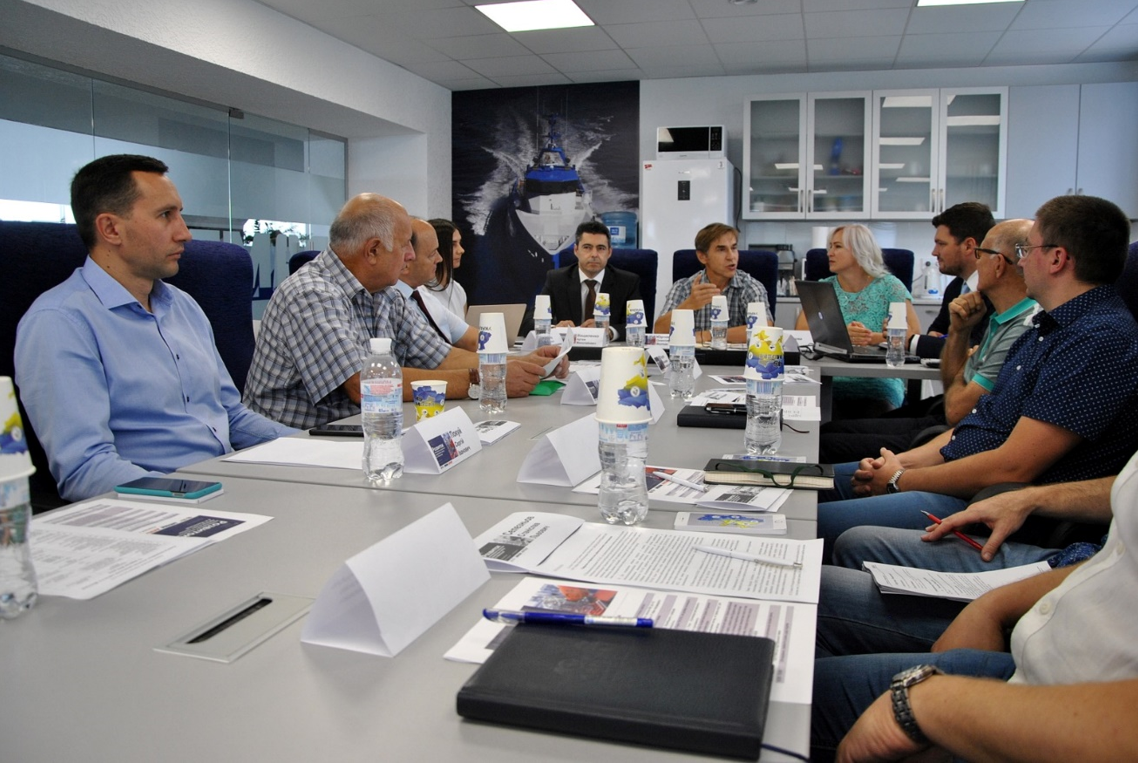 РFig. 4. At a meeting of the initiative group at MDEM in Mykolayiv

Creating roadmaps is the most important trend of all projects in the portfolio, but at the same time – the most difficult

Its importance is simply explained – this is where full synchronization with manufacturers of a particular industry occurs – from defining common development priorities to closing specific gaps in digitization. There are enough experts at APPAU, but we lack motivated manufacturers, coordination and leadership in groups and, ultimately, funding to perform such work in parallel. The motivation of group leaders, engineering firm directors can be damped down quickly, while hiring outside consultants or ongoing coordination work requires money. However, the movement towards the development of industry roadmaps continues – the question is how to ensure its continuity. Industry4Ukraine platform – the project that was added to our portfolio in June 2019 due to the work of another Industry 4.0 lobbying project from the Agency of European innovations. The platform serves as a location for dialogue with industry associations and unions on the one hand, and on the other with the authorities. The group of organizers, in addition to APPAU, included the CMU Office, SE «Ukrpromzovnishekspertiza» (UEX)), Agency of European innovations, The Ukrainian Chamber of Commerce and Industry (UCCI), The Institute for Economic Research and Policy Consulting, The Council of Entrepreneurs under the CMU, the Industrial Policy Department of the MEDT and other organizations. The first major conference took place in June, more than 40 associations and industry mergers joined the platform in July, and the second Industrial Week took place in November. Overall, this project remains controversial among other Industry 4.0 projects. On the one hand, we have some undisputed achievements, such as: 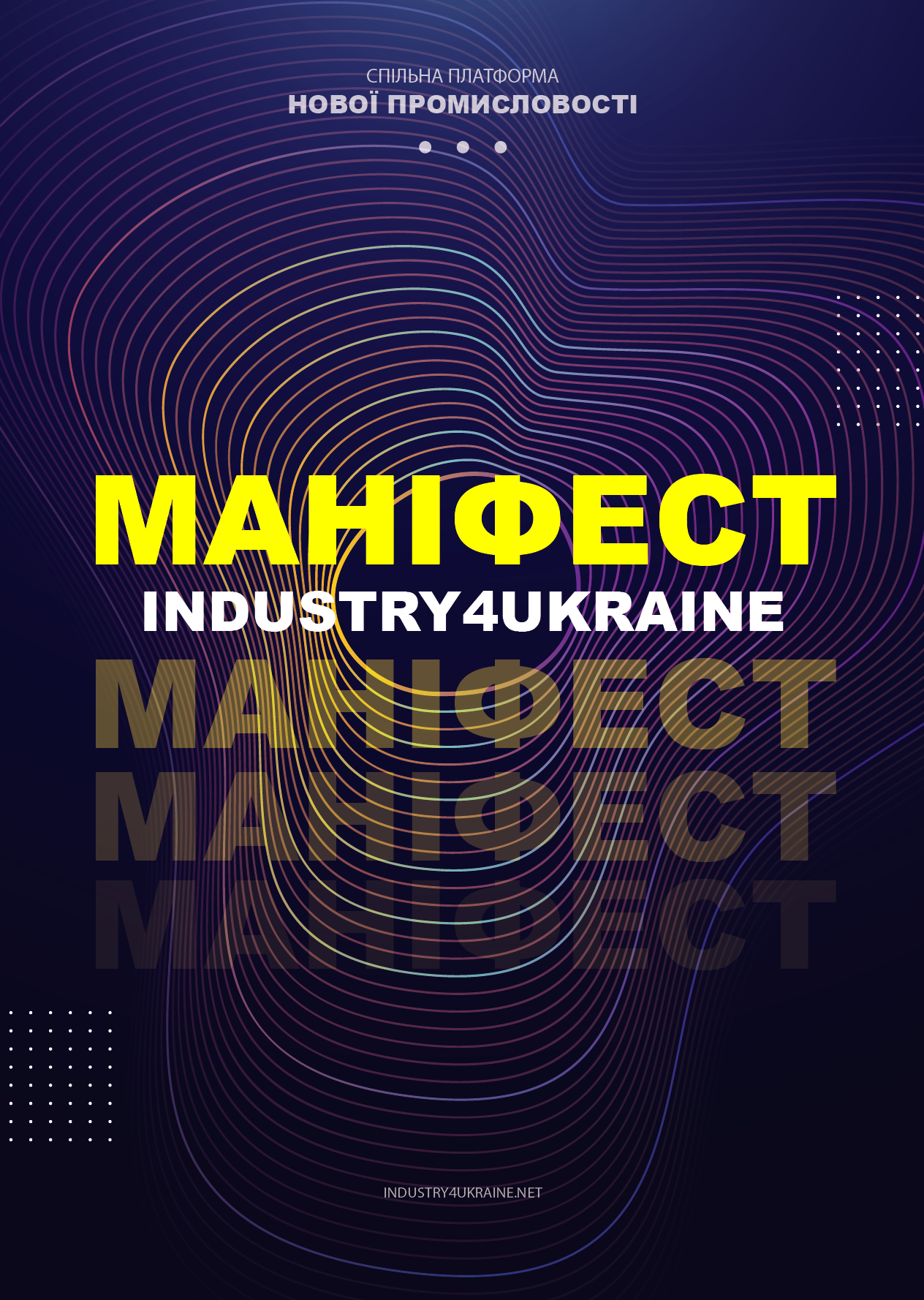 In 2020 APPAU will be more persistent in pursuing a policy of joint focus on top priorities. These are the provisions of the Manifesto and their decomposition – detailing in specific projects, – as in the already defined Industry 4.0 portfolio. Development of the regional network of Industry 4.0 Expertise Centers

Development of the regional network of Industry 4.0 Expertise Centers («Centers 4.0») – was also quite difficult in 2019. In 2018, two centers were opened in Odessa (at the Odessa National Academy of Food Technologies (ONAFT)) and in Kharkiv (at the National Aerospace University «KhAI»). In 2019, the Center of Industry 4.0 were opened in KPI (National Technical University of Ukraine named «Igor Sikorsky Kyiv Polytechnic Institute»), and another two centers were planned for opening in fall – in Sumy and Zaporizhzhia.

Overall, all Centers 4.0 showed high activity and the following points should be included in the positive balance of 2019:

However, APPAU expected better results for the development of Centers 4.0 in 2019. None of the existing Centers has met the challenges of accounting the innovators 4.0 at the local level. Consolidation and collaboration in local ecosystems are poorly performing and except for aCampus results and some of the works of KhAI and ONAFT it is difficult to give something to the credit for educational activities. The results of numerous vendor investments in Centers Lab 4.0 are unclear. There is much concern about communications – even about the serious and significant achievements of Centers 4.0 we (and obviously the whole community) find out by accident. Altogether, this has led to the suspension of the APPAU deploy program the Network of Centers 4.0. All Centers 4.0 and other universities – candidates for accession – should understand that the investments of APPAU and our commercial members in the development of universities should be profitable, and within the framework of the signed Memorandums there should be reporting.

This criticism is less relevant to individual executives – Departments, but much more to the level of rectors – vice-rectors, as well as Ministry of Education and Science officials. It is obvious to us that Centers 4.0 continue to operate as solely volunteer structures of 5–10 people, which cannot even be supported by their own leadership, let alone central or regional executive bodies. And it is equally obvious that in 2019 we saw the resource constraints of these small teams. Therefore, we should take a pause, think better about the results and plan corrective actions together. The latest event in the KPI gives us hope for common progress. Other Industry 4.0 initiatives
and projects

The list of our actions within the national strategy was much larger, in fact we initiated or tried to respond to any opportunities that gave us a chance to move forward faster. Hereafter some of promising new projects.

First, it is worth mentioning the progress on exports. APPAU has won the grant for national booth at Hannover Messe, that is world exhibition №1 in Industry 4.0. In this project, the most important thing is not the fact that a common booth of our innovators 4.0 in Hannover appears. But much more – the processes of consolidation, analytics, profiling, training and experience sharing, broad communications that will precede and continue the Hannover Exhibition. Actually, that's why the name of this grant project – «Hannover – as a catalyst for the industrial hi-tech development». This project should significantly raise the level of our innovators, improve their positioning in the international arena and attract the attention of numerous internal stakeholders to Industry 4.0.

Another important project, called Trans4mation has been initiated by the leader of the local movement 4.0 in the IT-Developer category, IT-Enterprise company. The forum brought together more than 600 visitors, was rich in international exchanges and attracted the attention of the media. Events of this scale were the first time in Ukraine and this is definitely a great step forward for the whole community 4.0. Mass enlightenment of the market and involvement of Ukrainian customers, their best connection with the potential of local developers remain the top priority of movement 4.0 since 2016. However, so far we have not had such initiatives till now. 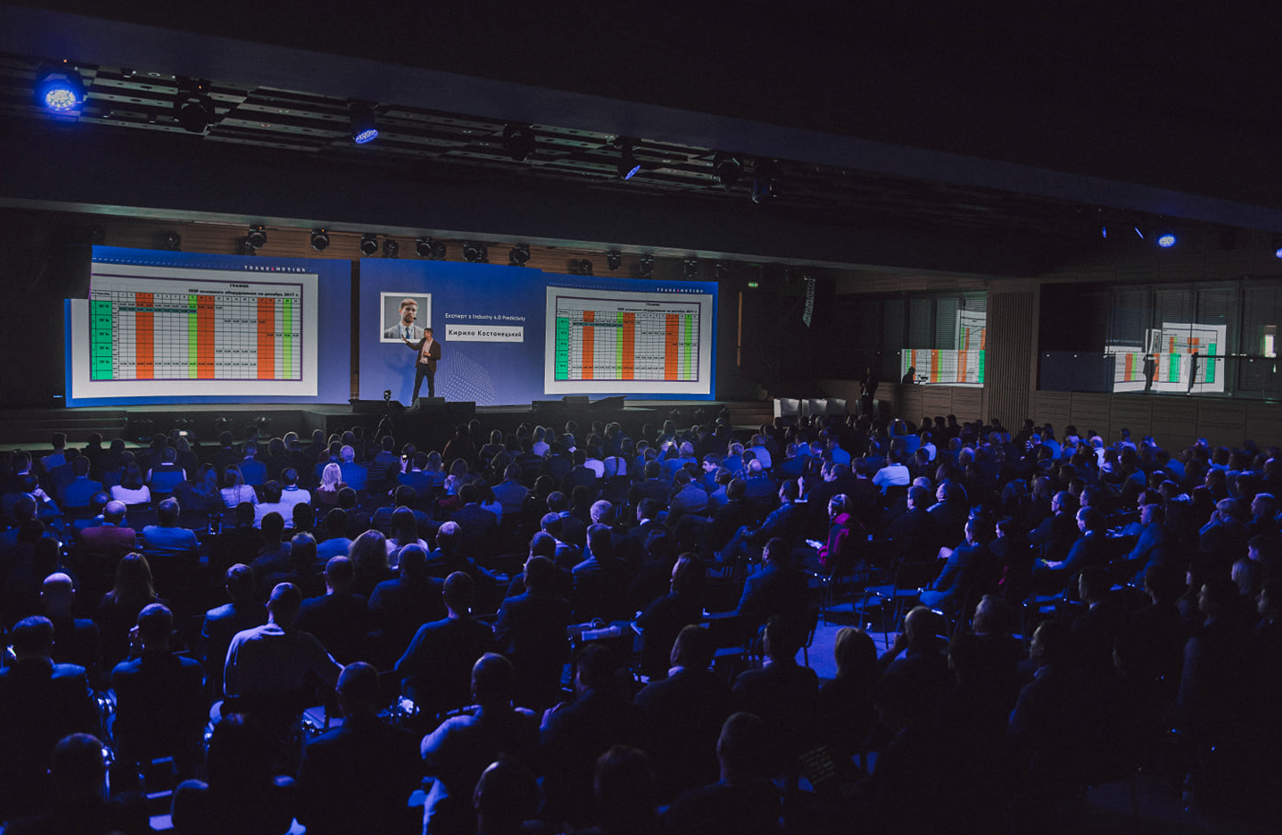 The main results of the 1-st year of National strategy Industry 4.0

This report is part of the general reporting that the APPAU Executive management prepares for the Board and General Meetings, which are traditionally held in January. The Executive management conclusions form the basis for discussion, decisions and plans of the association for the next calendar year. Summing up the results of the 1-st year of National Strategy 4.0, we note that the implementation of 4 strategic projects by the association efforts, one more project – together with partners (Industry4Ukraine), and the entry into new perspectives of international cooperation, in our opinion, is a good result. At the same time, the optimal balance between the strategic, long-term goals of a nationwide development and the short-term, commercial interests of our community members has not been reached. The year 2019 shows us the exacerbation of this issue, but at the same time the ways to solve it. Only international donor assistance with better involvement of government entities and better cooperation at different levels can ensure this balance. In the absence of them, strategic projects for the Industry 4.0 development will have to be phased out.

We express our anticipation and hope that 2020 will be a year of growth and we will be able to achieve a better balance, reach a new cooperation level, including with government entities.